We started out as a working group from bigdata.ro. Our main purpose was to learn and practice on Spark Structured Streaming, Machine Learning and Kafka. We built the entire use case and then the architecture from scratch.

This is a learning case story. We did not really know from the beginning what would be possible or not. For sure, looking back, some of the steps could have been optimized. But, hey, that’s how life works in general.

Since Meetup.com provides data through a real-time API, we used it as our main data source We did not use the data for commercial purposes, just for testing.

The problems we tried to solve:

For these we developed 2 sets of visualizations:

Detailed Explanation of the NER Pipeline

In order to annotate the data, we need to transform it into a certain format, from text to numbers, and then back to text.

We used a machine from Hetzner Cloud with the following specs: 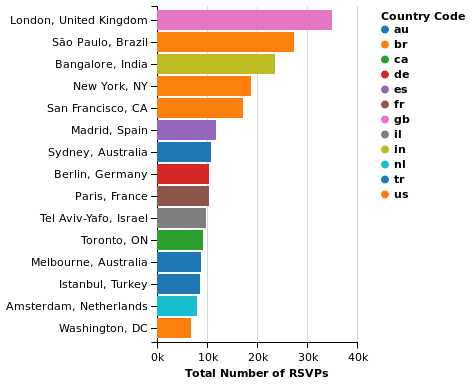 As you can see, most of the RSVPs occur in the United States, but the city with the highest number of RSVPs is London.

Romania – Top Cities in Romania by Number of RSVPs

As you can see, most of the RSVPs are in the largest cities of the country. This is probably due to the fact that companies tend to establish their offices here and therefore attract talent to these places. 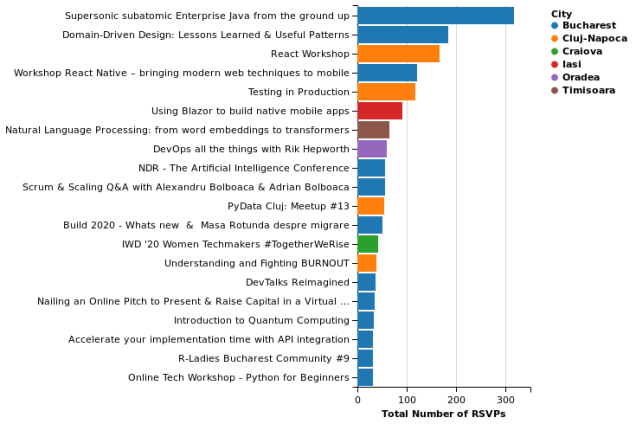 * This was produced with Grafana using RSVP data processed in Spark and saved locally.

* This was produced with Grafana using RSVP data processed in Spark and saved locally.

This visualization is done on data from July.

This visualization is done on almost 1 week of data from the start of August. See Issues encountered chapter, point 5.

Issues discovered along the way

All of these are mentioned in the published Notebooks as well.

This study group was a great way for me to learn about an end-to-end solution that uses Kafka to ingest streaming data, Spark to process it and Zeppelin to build visualizations on it.

It was great that we all had different backgrounds and we had interesting debates about how to approach problems and how to solve them. Besides working with and getting to know these nice people, I got to learn the fundamentals of Kafka, how to use Spark Streaming to consume Kafka events, how a Named Entity Recognition system works, and how to use Spark NLP to train a NER model and make predictions with it. I’ve especially enjoyed one of our last meetings, where we worked together for a couple of hours and managed to build some great visualizations for meetup keywords and RSVPs using Zeppelin and Grafana.

On the downside, the project took almost twice as long to complete than we originally planned – 18 weeks instead of 10. Towards the end this made it hard for me to work on it as much as I would have wanted to because it overlapped with another project that I had already planned for the summer.

All in all, I would recommend this experience for anyone interested in learning Big Data technologies together with other passionate people, in a casual and friendly environment.